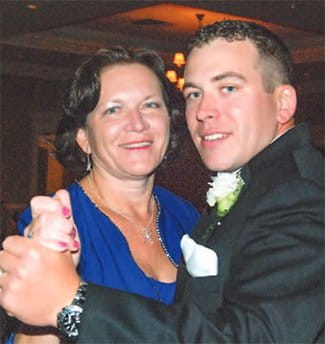 When Nancy Quinn consulted her doctor about unusual symptoms she was having, she never imagined she'd be diagnosed with advanced ovarian cancer. That was nearly eight years ago. Now 57, Quinn finds that life is just a little sweeter.

It started with heavy periods. Then, a flaring pain developed on her right side below her ribs. Concerned about her symptoms, Quinn, a nurse, knew it was time to see her doctor.

Quinn's doctor suspected a cyst on her ovary. But when an MRI showed a mass in her abdomen, her doctor realized the problem might be more serious and required immediate action.

Quinn was able to see David Holtz, MD, gynecologic oncologist at Paoli Hospital, right away. In December 2006, soon after her initial appointment, she underwent a total hysterectomy at Lankenau Medical Center as the first step in managing suspected ovarian cancer.

"The only way to diagnose ovarian cancer is by removing the ovary and examining it," explains Dr. Holtz.

The pathology report confirmed the diagnosis of stage IIIC ovarian cancer, an advanced form of the disease that had begun to spread. Fortunately, Dr. Holtz had removed all visible ovarian cancer nodules during Quinn's surgery.

"After surgery, Dr. Holtz told me that most patients with stage IIIC have about five years to live, give or take, with the possibility of an additional 18 months with intraperitoneal chemotherapy," Quinn recalls. "That was devastating to hear, but I was determined to fight as hard as I could for my future."

One month after her surgery, Quinn began intraperitoneal chemotherapy and the fight of her life. Dr. Holtz continued to be directly involved in her care, administering her chemotherapy and carefully monitoring her throughout the long course of treatment.

"We see patients through thick and thin," says Dr. Holtz. "We were one of the first institutions in the Philadelphia area to provide intraperitoneal chemotherapy, in which medications are delivered directly into the abdomen through a catheter. This allows us to give smaller doses of chemotherapy every week instead of one big dose once a month." Research shows that this method improves survival rates in women with ovarian cancer.

Once a week, Quinn had to stay overnight at Lankenau to receive a 24-hour infusion of medication. Despite battling difficult side effects, such as constant nausea and numbness in her hands and feet, Quinn persisted through six cycles of chemotherapy over an 18-week period. Each cycle involved three weeks of treatment, followed by one week of recovery.

Later in 2007, Quinn enrolled in a clinical trial that Dr. Holtz had brought to her attention. The trial may help her immune system learn how to fight off cancer cells.

Quinn has been in remission since completing chemotherapy and continues to see Dr. Holtz at Paoli Hospital twice a year for follow-up. She also undergoes a CA 125 lab test every four months and a CT scan every nine months to monitor for new signs of cancer. While many factors affect the prognosis for achieving and staying in remission after ovarian cancer, women with more advanced disease generally face tougher odds.

"When people ask me how I beat the odds, I say it's because of a positive attitude, Dr. Holtz, my faith, and the faith, love, and prayers of my friends and family," Quinn says. "This is a difficult battle that can be won, but only with the help of others. It's not something you can do alone."

Today, more than seven years after her diagnosis, Quinn is grateful she can enjoy all the big and small moments in life.

"I always knew I was lucky, but now I don't want to miss a snowflake falling or a flower blooming," she says. "You learn to savor it all."