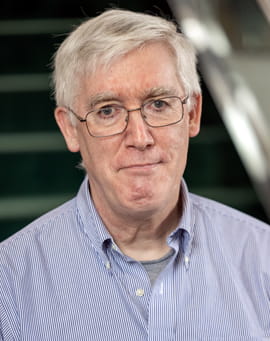 
Dr. Mullin’s research focuses on the role of tight junctional leakiness in cancer, aging, infectious diseases and inflammatory diseases in the GI tract, respiratory tract, the oral epithelium and the lining of the uterus. He also is investigating the effect of micronutrient consumption/nutrition on reducing epithelial barrier leak, and the role of barrier (junctional) leak in infectious diseases such as Ebola, Marburg and coronaviruses.

The epithelium is the cellular covering of internal and external body surfaces, including the lining of vessels and small cavities. It consists of cells joined by small amounts of gasket-like proteinaceous sealing strands—and looks very much like the view you see when you look down at a tile floor.

While epithelial linings found throughout the body are unique to the given organ/tissue, all function to separate two internal compartments: lumen and bloodstream. The luminal side of an epithelial layer/barrier communicates directly or indirectly with the outside environment, e.g., food material in the digestive tract or newly breathed air in the lungs. The other compartment, the bloodstream, is the pristine fluid space that houses, for example, red blood cells and the immune system.

The epithelial lining’s first and most important function is to act as a barrier to separate those two compartments. If there’s a compromise of the barrier function—that is, if the junctional seals become leaky—it can lead to medical problems such as inflammation.

Dr. Mullin’s research group, which bridges LIMR and the Division of Gastroenterology of Lankenau Medical Center, focuses on the tight junctions—the gasket-like seals—between the individual epithelial cells that make up the lining of the digestive tract, and how they become leaky in the early stage of gastrointestinal (GI) cancer, many infectious diseases, Barrett’s esophagus, and inflammatory bowel diseases (e.g., Crohn’s disease, ulcerative colitis, celiac disease).

Several years ago, researchers discovered beneficial changes in epithelial linings in the presence of certain micronutrients. Dr. Mullin’s team is investigating how lack of one of those nutrients, zinc, affects numerous disease processes by reducing leak of the epithelial tight junctions.

Barrett’s esophagus: Arising from chronic heartburn or gastroesophageal reflux disease, Barrett’s esophagus impacts one to two percent of adults in the United States. It is too often a precursor to cancer of the esophagus, which has a very high mortality rate. In a current patient-based study, Dr. Mullin’s group is determining if orally administered zinc can reduce the risk of cancer developing out of Barrett’s esophagus. He and his collaborators have patented and are preparing to license out the intellectual property for using zinc as a cancer preventive in Barrett’s esophagus.

Crohn’s disease and ulcerative colitis: Dr. Mullin’s lab is also examining whether micronutrients can reduce tight junctional leak and therefore have therapeutic application in treating these GI inflammatory diseases. His group uses both cell culture studies and patient-based studies in this overall project.

Infectious diseases: His lab also is performing preclinical investigations on whether tightened epithelial junctions can help ward off infection with pathogens such as ebola virus and HIV. Specifically, they are trying to determine if low zinc levels make the epithelial lining more porous, thus making it more likely that a virus such as HIV, hepatitis C or HPV can penetrate an epithelial barrier that it contacts and thereby enter the patient’s bloodstream.

Dr. Mullin’s lab performs combinations of studies with epithelial cell cultures grown in the lab, with animal epithelial tissues, human epithelial tissues and different classes of patients with gastrointestinal diseases. The focus is always on the barrier function of the epithelial cell layer, the disease processes that make these layers leaky, and the newly discovered ability of certain micronutrients to make them less leaky.

Phase 1 clinical studies being performed with Lankenau’s Division of Gastroenterology are underway in Barrett’s esophagus and reflux disease. Preclinical studies are examining the micronutrient modification of epithelial tight junctions on a molecular level, and the effect of these changes on inhibition of viral invasion across epithelial barriers. Recent work with the Wistar Institute of the University of Pennsylvania is examining the action of zinc in semen in inducing modification and improvement of epithelial junctions, and thereby reducing infection by STDs.