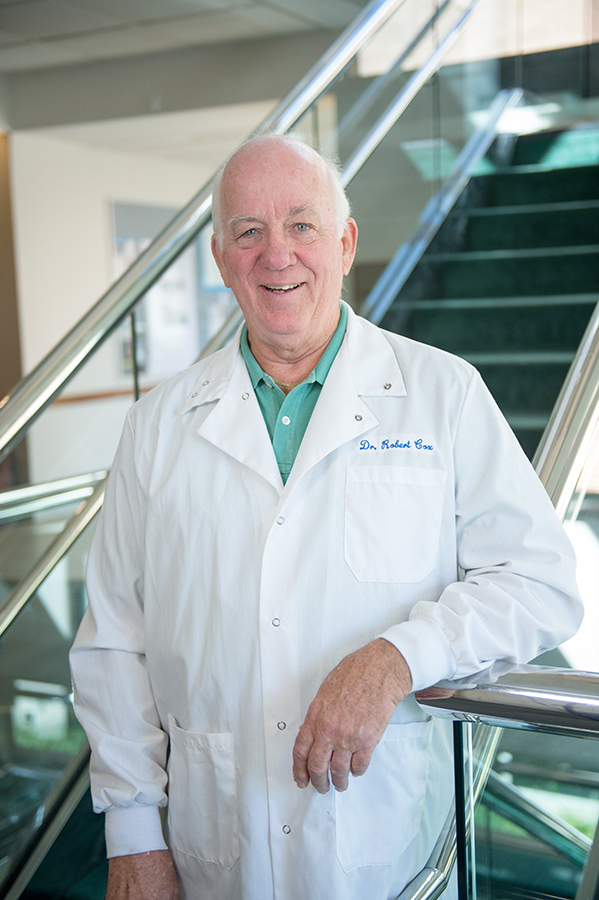 
Research interests include: investigating how ion channels regulate the function of the heart and blood vessels in health and disease at both the functional and molecular level.

However, since calcium is also important in other muscles, these drugs can also act on the heart with side effects that can potentially lead to heart attack and heart failure. Moreover, current drug treatments for high blood pressure lose their effectiveness with time as a result of what so called “drug resistance.” This necessitates either an increase in dose or the addition of other drugs. Both options can potentially exacerbate the side effects and prevent normal heart and kidney function.

To address these concerns, Dr. Cox focuses his research on a type of calcium channel that is present only in arteries. Calcium channels are microscopic molecular machines that regulate the flow of calcium across cellular membranes. By targeting the special type of calcium channel found exclusively in blood vessels, not found in heart muscle, Dr. Cox's research will lead to the development of more effective, safe and selective therapy against high blood pressure.

I. Role of Altered Arterial Potassium Channel Function in Hypertension
Contraction and by implication vascular resistance is closely coupled to membrane potential in arterial smooth muscle cells (ASMC), and in turn membrane potential is primarily determined by the properties of potassium channels (KCN) in ASMC. Altered function of KCN in ASMC associated with hypertension, atherosclerosis and diabetes has been recognized for a number of years. Such differences likely contribute to altered cardiovascular function in these disease states. This project supported by National Institutes of Health seeks to identify factors that contribute to the altered KCN function of ASMC in hypertension.

My lab has shown that intracellular Ca2+ inhibits a particular class of KCN called voltage-gated K+ channels (Kv) that can explain many of the seemingly divergent differences in properties of ASMC between normal and hypertensive subjects. The goal of this project is to a) identify the individual molecular constituents that contribute to Kv channel function in ASMC, b) determine which are inhibited by Ca2+, and c) determine how Ca2+ exerts this effect.

II. Calcium Channel Subunit Expression in Arterial Smooth Muscle
So-called organic calcium channel (CACN) blockers have become one of the most valuable therapeutic drug classes for the treatment of high blood pressure. These drugs target one family of CACN usually called the dihydropyridine-sensitive Cav1 family. However, these channels are found in the heart, the nervous system as well as many other cells in addition to those of blood vessels. In addition, Cav1 blockers are often administered systemically before coronary artery bypass surgery to prevent vasospasm of the segments being transplanted.

Since many of the patients receiving such treatment often have compromised cardiac function, use of Cav1 blockers that are highly selective for vascular versus other Cav1 complexes is desirable. However, often that selectively is not sufficient to prevent additional compromise of cardiac function in such patients. Functional Cav1 are composed to multiple protein subunits, and in other non-vascular CACN subunit specific compounds that inhibit CACN function have been identified. While the first isolation and cloning of a Cav1 was done used arterial tissue, little is known of the detailed subunit composition of Cav1 in blood vessels and whether subunit expression is altered in vascular disease states.

To fulfill the goals of this project supported by the WW Smith Charitable Trust, experiments have been designed to determine the molecular and functional properties of Cav1 in ASMC from large and small arteries of normal and hypertensive subjects (rat and human). ASMC isolated from arteries is used to determine a) expression of genes encoding Cav1 subunits; b) the presence of splice variants of CACN subunits; c) the combination(s) of subunits/splice variants present in native Cav1; and d) the functional and pharmacological properties of Cav1 subunit and splice variant combinations heterologously expressed in model cells with native myocytes.

The results of these studies are expected to reveal the molecular basis for the functional differences in CACN seen in arteries of different size, and importantly to identify (some of) the mechanisms responsible for alterations in CACN properties associated with high blood pressure. In addition, these results will provide a rational basis for the development of new CACN channel blockers with improved cardiac/arterial selectivity that would avoid further depression of cardiac function in already compromised individuals at the time of coronary bypass surgery.